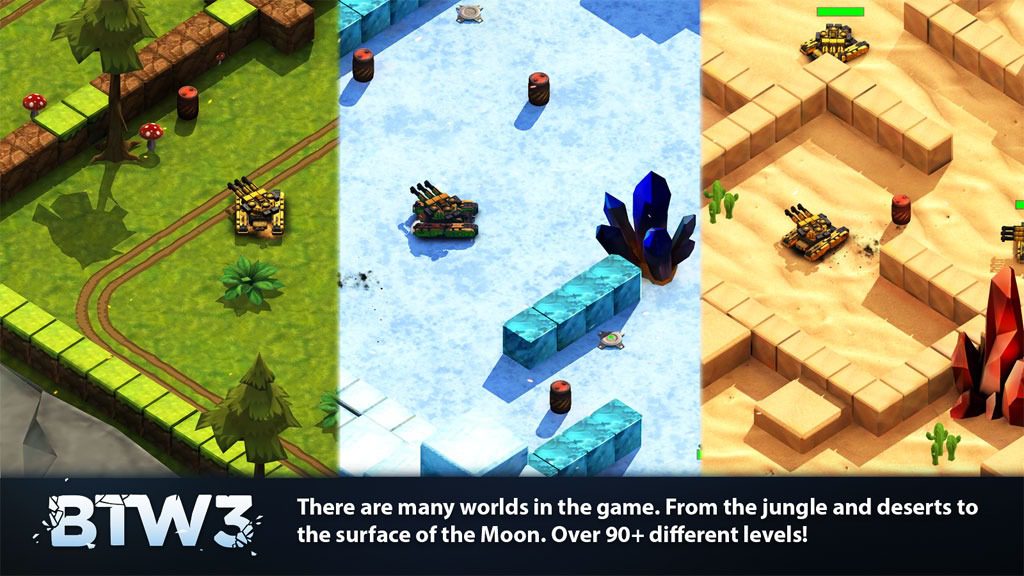 Block Tank Wars 3 – continuation of a loved by players online arcade about world of tanks with cool action battle. Rain down rockets on armada of enemy tanks in offline campaign. Make your own tank from great choice of arsenal and tanks, customize war machine with your own style with the help of great choice of camouflages.

You can play our pixel shooter offline without internet. Complete all levels and quests with labyrinths in mine and craft style. Become a super tankman of a custom warmachine and develop your own strategy of war according to current upgrades, learned skills and experience. Upgrade your metal monster and spread chaos among enemies. Diversity of levels and mazes let you try different tactics and develop the best strategy according to goals.

Shoot hordes of enemy tanks and play in campaign whenever you desire. There is no energy or other restrictions in our tank shooter. Log in as much as you can to receive more bonus resources to conduct a war.

Earn experience by completing levels and quests, to get access to the best arsenal and tanks. As well as receive skill points to improve your combat skills, essential for arcade shooter.

🎮 Long campaign
Raid your nemesis domain in more than 90 playable levels in offline campaign. Play tank combat shooter even during the travel and without internet.

🎮 Exciting combats
Destroy hordes of enemy tanks. Tactical and blitz battles in infinite labyrinths of areas. Pixel shooter in the best traditions of the genre.

🎮 No energy
Enjoy tank shooter without breaks and without energy. Combat shooter does not have energy at all, what let you play the game as much as you wish.

🎮 Cool variety of guns and armor
Make your own mega tank with the help of great arsenal of weapons and armor. Use foundation from armored vehicle, warmachine, combat platform, hoover and more. Great variety of weapons, from shotgun and machine gun, to rockets, railgun and missile launcher “Tornado”. Shoot nemesis from any gun.

🎮 Diversity of enemies
Disintegrate all king of enemies. From tanks with different weapons to defense towers and artillery.

🎮 Fine tuning of arsenal and tanks
Use unique modules for delicate adjustment of tanks and guns. Use the module which is the most appropriate for your play style and desired strategy. Everything is up to you – blitz through enemies in dynamic shooter or use more tactical ways of war.

🎮 Daily bonuses and rewards for completion of all quests
Get free gold, guns and armor for daily login. Complete additional quests on all levels to get all stars and bonus rewards. Receive bonus containers and gold every few hours.

🎮 Intuitively easy controls for tank shooter
Variety of tank controls. Shoot at targets by tapping the enemy tank on the combat screen. But to evolve from rookie to master sniper of tank shooter you need skills.

🎮 Customize appearance of your tank
Make your own look, with vast variety of camouflages, like modern, forest, khaki and others. Make trouble for enemy tanks with style.

If you look for combat tank shooter, and wish to shoot enemy tanks and defense towers even offline, our arcade shooter is designed for you. Both fans of action shooter and fans of shooter with more tactical and strategic approach will love the game. Rpg elements, as upgrades of tanks and weapons, detailed customization of arsenal and choices of appearance will make your progress in the game more significant.

Try out the third part of a famous tank shooter. Download combat arcade shooter for free.

👨🏽👳🏽‍♂️🎅🏽Do you want to ask a question about the game or find friends and allies?
Facebook: https://www.facebook.com/GDCompanyGames/
Support: support@gdcgames.ru

# Reduce the display time of the tips to once every 4 seconds
categoryGames, Puzzle
date_range17 Dec 2020