Building games are famous for their massive buildings, allowing you to manage and operate to create your own dream city. This article will help you synthesize the top 12 construction games with many interesting options that you can play right on your Android and iOS phones. Let’s start exploring! 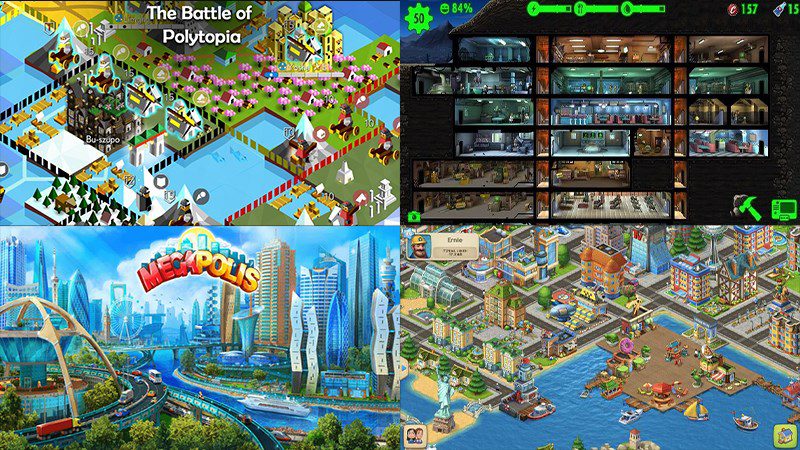 You will play as the mayor who is responsible for building his city, from a rural model to a modern megacity with skyscrapers. However, the more populated the city, the more problems arise such as lack of living resources, lack of construction materials, need to spend more money to stimulate the economy, … requires you to have bravery to overcome.

The game has beautiful graphics that simulate a busy city like in real life: traffic, education, security, people,… SimCity BuildIt also allows you to visit your friends’ cities to exchange materials or how to run the city.

Set in a post-apocalyptic setting, humans are forced to build underground cities to survive. If you want to expand the city, it is imperative that more survivors join to help operate it. The survivors are divided into two main groups: the workers in charge of production (printing money, chemistry, making weapons, …) and the military group (protecting the city, going out to search. resources,…).

The game has beautiful graphics, the characters have optimistic funny faces and attractive gameplay. Not only do you have to run the city, but you also have to protect it and find the resources to run it. There are many rooms with different functions, you can arrange them arbitrarily, 2 similar rooms will combine into a bigger room,…

3. The Battle of Polytopia

This is a game that doesn’t just stop at building a city, but also in sending troops to invade other cities. The Battle of Polytopia has many armies for you to choose from, each type of army will have their own land. When war breaks out, two opposing lands will border each other and players will attack each other’s strongholds as turn-based attacks.

Although the graphics are made of straight lines, the publisher has cleverly used them to create a wonderfully beautiful world that makes the game unique. If you don’t like fighting with the machine, you can invite your friends to play together to find out who is a great strategist.

Megapolis is famous for building cities with all kinds of different industries such as: airports, scientific research facilities, quarries, infrastructure,… Each area is very simulated similar to the real-life version, creating a sense of familiarity that makes players excited.

In Megapolis, players do not simply develop a random city, but must carefully calculate and arrange it properly to get the highest profit. Besides, the city is also subject to market and economic laws, so the constant lack of resources forces you to have a reasonable spending regime. The game also allows you to interact with friends through exchanging goods and visiting each other’s cities.

Away from the bustling city, the game takes players to the peaceful countryside to establish a career. You as a farm owner must actively participate in production to create a lot of products from which to earn a lot of profit to expand your farm. As the farm grows, players will have enough money to build a city of their own.

The game is set in the city of the future – where technology has developed dramatically. 2020: My Country allows players to interact with their city a lot such as: against natural disasters, epidemics, aliens or even dinosaurs,… If you do not coordinate people properly the city will suffer quite a bit of damage.

The game encourages players to build their own dream city, so there are no architectural constraints. More interestingly, you can play this game without an Internet connection. The game has countless quests for you every day with a lot of different rewards. The more your city expands, the greater your responsibility.

This is a pretty special game when players can only see their city in the form of cards. The game will pose situations and you will make your choices to best benefit your city. Building a house this time is to put the cards in the empty space on the map like a board game.

Despite the new gameplay, the publisher has included detailed instructions to help you get used to the game quickly. At the same time, the image on each card is made very eye-catching so that players can visualize it in their heads. The advantage of playing cards is that you can search for the area you are looking for easily, rather than dragging all over the place to find it.

TheoTown is one of the few games that allows you to build the wonders of the world: the Eiffel Tower, the Egyptian pyramids,… in a simulated size that is most similar to the real world. You play as a person who reclaims a vast forest land without a shadow, gradually developing the city into a megacity but still ensuring environmental protection.

The houses in the game are meticulously invested by the publisher: there are many floors, many rooms, with trees and gardens,… You can upgrade the houses from level 4 to become skyscrapers. Heaven brings huge revenue. In order for the city to operate at its best, players need to build a water supply system, an electrical system,…

City Mania: Town Building Game is a game that the higher you level up, the more modern the city will be. At that time you will be able to unlock many new buildings such as schools, research areas, amusement parks, commercial centers, … The game also allows you to appoint the role of people in the game to They help you run the city.

The graphics in the game must be said to be very eye-catching, recreating the city of your dreams with the main ideater being yourself. You are also the most powerful person in the city, can do whatever you want without breaking the law because you are the law. Build or destroy the city is up to you.

The game will take you to a deserted island and allow you to do anything with it. However, at the beginning of the game, you are only allowed to build buildings and when you have finished building, you can interact with those buildings. Because it is located on a desert island, it is extremely necessary to trade and buy the sea version, so focus on this the most to get the highest revenue.

The game has simulated the real-life city very vividly, from busy roads with cars, beaches with boats parked close together, restaurants, industrial parks, … creating a familiar feeling for people. Play makes them happy. Not only that, you can also expand your city to other islands, later you can establish a nation of many islands combined.

It can be said that the publisher Sparkling Society is very interested in building a city on the island. The game takes players to an island full of savanna without a shadow. You will play as the mayor and start building the city of your dreams. The game has a diverse mission system with extremely high rewards.

The game focuses on leveling up, the higher the level, the more epic the game will allow you to build. The more the city expands, the more people will move in and there will be other problems that require you to be very flexible in handling the situation. When you first play, your house does not look very eye-catching, but when you have built many buildings, the city will appear so shimmering and dynamic that you want to play forever.

The game is set in an ancient city to help players better understand the lifestyle of ancient people, while still using knives. You will run your own village, build constructions such as: windmills, agricultural fields, blacksmiths, beer shops, … The game also allows you to train troops to protect the people or conquer other cities.

The graphics in the game are inspired by old Europe such as: houses with chimneys, people on the street with scarves on their heads, houses made of wood, etc. All of these help keep a village peaceful. The vase appears in a beautiful, poetic way that makes players excited. The publisher also meticulously creates characters with different looks such as: tall, thin, short, chubby, slim, beautiful, ugly, … to give players the most authentic experience.

Hopefully the above article will help you choose the right game for your playing style. What are you waiting for, download your favorite game right away to have moments of great game experience with your friends right now!